Meetings for Members of ACSS Working Group on Critical Security Studies in Lebanon, the US and Japan 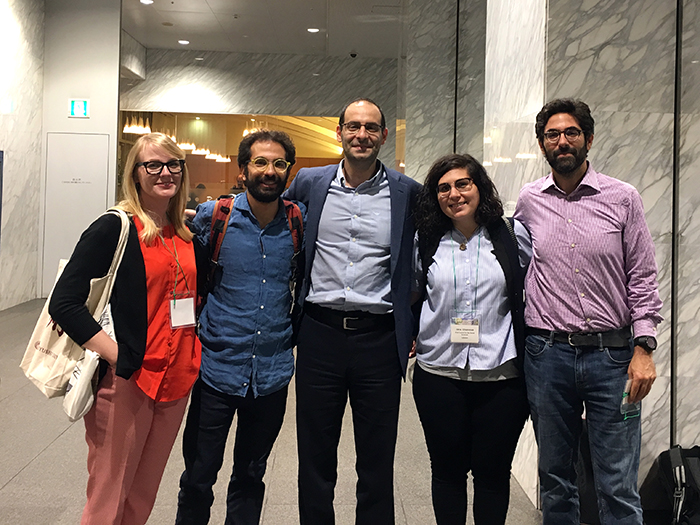 (Left to Right) Nicole Grove, Jamil Mouawad, Omar Dahi, Jana Chammaa and Karim Makdisi
In the last quarter of 2018, members of the ACSS Working Group, the Beirut Security Studies Collective, took part in various fora with the aim of supporting the Collective’s work to foster and disseminate critical research on the study of security and insecurity in the Arab region.
Sami Hermez (Northwestern University in Qatar), a core member of the Collective, organized a workshop titled “(In)security in Everyday Life: Perspectives from the Middle East” on Sep 7-8, 2018 at the ACSS Office in Beirut. The workshop brought together around 20 international and regional scholars working on the Middle East. Workshop participants investigated how fear, risk, precarity, and instability operate in people’s daily maneuverings, and how aspiration, hope, and wellbeing are achieved and sustained. By focusing on micro relations embedded in questions of security and insecurity in the Middle East (i.e. everyday life), the workshop aimed to contribute to a subfield around the Anthropology of Security that can offer a radical critique of dominant models of understanding security.
Four members of the Beirut Security Studies Collective organized a panel during the World Social Science Forum (WSSF), which took place on September 25-28, 2018 in Fukuoka, Japan. Panel speakers discussed the origins and work of the Beirut Security Studies Collective so far, and presented some of their own on-going research on security issues in the Middle East. The panelists were the following:
Omar S. Dahi, Associate Professor of Economics, Hampshire College, USA (Core Member)
Paper Title: “Who Is a Threat to Whom? Climate change and the politics of threat multipliers in the Syrian conflict”
Nicole Grove, Assistant Professor of Political Science, University of Hawaii Manoa, USA (Core Member)
Paper Title: "Substrate and Saturation: Big Data, beta testing, and emergent security ecologies in the Gulf"
Jamil Mouawad, Max Weber Fellow, European University Institute, Italy (Core Member)
Paper Title: “Lebanon’s border areas in light of the Syrian war: New actors, Old Marginalization”
Karim Makdisi, Associate Professor of Political Studies, American University of Beirut, Lebanon (Affiliate Member)
Paper Title: “The United Nations: The view from the Arab World”
Samer Abboud (Villanova University), the co-coordinator of the Beirut Security Studies Collective, and Benjamin Muller (King’s University College at Western University), an affiliate member of the Collective, organized a closed bilingual workshop in late October 2018 at Villanova University for eight of the selected researchers who had answered Abboud and Mueller’s call for papers on the study of intervention and state-building on the Middle East. The contributions will be combined in a special issue that will be submitted to Third World Quarterly: Thematics for possible publication. The call for papers aimed to solicit empirical contributions examine how interventions in the Middle East manifest materially in local spaces and how various political and socio-economic reconfigurations are brought about through these interventions.