Call for Papers: Conference on Contemporary Amman and the Right to the City 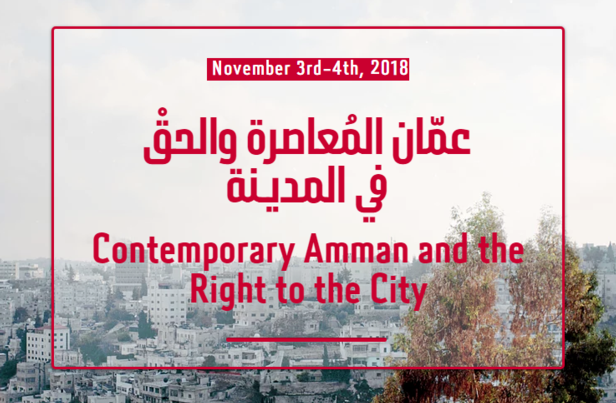 Call for papers
International Conference
Contemporary Amman and the Right to the City
November 3-4, 2018
Organized by: Ifpo Amman, Columbia Global Centers | Amman, Studio-X Amman
Abstracts due by June 30, 2018
A city of four million inhabitants today, Amman’s expansion has become disproportionate to its urban history. Amman has experienced an impressive urban growth over the past fifty years, driven by forced migration and market laws. Developing from a small rural settlement at the end of the 19th century, Amman evolved into a regional crossroad at the end of the 20th century, and has become today a symbol for the consolidation of Hashemite rule, and as a result, the site of its contestation. Amman’s exceptional position among other regional capitals and its recent urban history has forced its inhabitants to create narratives concerning the city’s foundation, invent urban traditions, and negotiate ways of socialization.
As housing and upgrading policies have slowed down, and plans to develop a robust public transport system remain underdeveloped, Amman’s residents are struggling on a daily basis to circulate, house themselves and their families, study, work and relax. Public participation is regularly discussed in the media and public sphere, and residents are looking for ways to mend the gap between their aspirations for Amman, and the reality of living conditions in the city. In the 21st century, Amman has become the intellectual, diplomatic and economic capital of the region. Those changes have had a large impact on the everyday life of its inhabitants, on the composition of the population of the city and on its regional and international perception and influence.
This conference seeks to present three interrelated themes through which the right to the city can be understood, articulated, negotiated, or contested. These themes include urban policies and governance; social fabric and urban practices; and housing and integration.

1. Urban Policies and Governance
In a city which has known a development as rapid as Amman, the evolution of urban policies and structures of urban governance is of major importance. Tracing the origins of the municipality from the late Ottoman period until today, this panel will focus on structures of decision-making in the urban context. Urban policies and governance will be examined against the economic and political dynamics from which they arose while paying attention to both individual and collective actors involved.
Some topics to address could include:
2. Social Fabric and Urban Practices
The second axis of this conference focuses on the social fabric of Amman and the definition of a sense of common belonging to an urban community. Inhabitants of Amman are constructing an urban identity based on their spatial and social imaginations. The investigation will engage with the ways in which urban narratives of Amman, developed by specific communities, neighborhoods or demographics of the population, inscribe themselves in the physical, social and discursive fabric of the city.
Some topics to address could include:
3. Living in Amman: Housing, Access, and Speculative Growth
Speculative growth enhanced by liberal governance, foreign direct investment and political turmoil has affected the distribution of wealth, access to resources, and opportunity across the city. Questions of accessibility, inclusion, opportunity and equality are re-evaluated in this moment of Amman’s position within the regional and global context. This panel will focus on the current context of urban planning policies as they relate to the provision of essential services to residents including housing, water, electricity, transportation, education andsocial services.
Some topics to address could include:
Scientific Committee
Myriam Ababsa (Ifpo), Nora Akawi (Columbia University GSAPP / Studio-X Amman / CGC | Amman), Jawad Dukhgan (Studio-X Amman / CGC | Amman), Nadine Fattaleh (Studio-X Amman / CGC | Amman), Falestin Naïli (Ifpo), Norig Neveu (CNRS/IREMAM).
Please submit your abstracts (up to 350 words) to info@ammanconference2018.com by no later than June 30, 2018.
Abstracts will be reviewed by the conference’s scientific committee and organizers. Selected participants will be notified in mid-July.
Timeline
June 30, 2018: Deadline for abstract submission
July 2018: Selected applicants notified
September 2018: Deadline for paper submission
November 3-4, 2018: Conference dates
Download a pdf version of the open call here​.
For more information about the conference, visit www.ammanconference2018.com.