New from UC Press: The Land of Blue Helmets: The United Nations and the Arab World 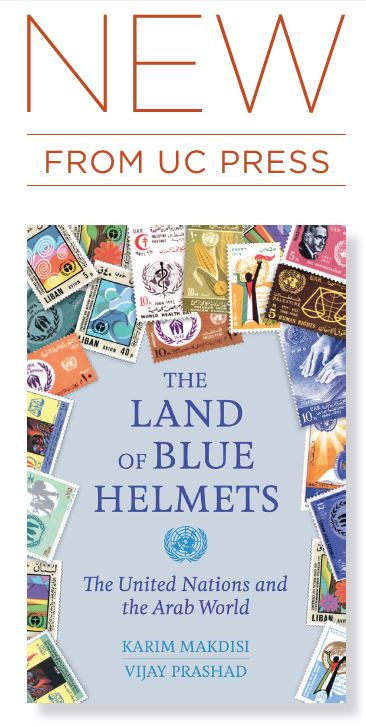 The Land of Blue Helmets
The United Nations and the Arab World
KARIM MAKDISI AND VIJAY PRASHAD
New book from UC Press to be available in Summer 2016
**** Order your copies now and benefit from a special discount ****
ACSS member Karim Makdisi (American University of Beirut, Issam Fares Institute of Public Policy and International Affairs) and historian and journalist Vijay Prashad (Trinity College) have authored a new book titled "The Land of Blue Helmets: The United Nations and the Arab World" to be published by University of California Press in July 2016.
About the Book
Born in 1945, the United Nations came to life in the Arab world. It was here that the UN dealt with early diplomatic failures and challenges that helped shape many of its ideas and institutions such as peacekeeping and political mediation. It was also here that the UN found itself trapped in, and sometimes part of, confounding geopolitical tensions in key international conflicts in the Cold and Post Cold War periods, from Palestine and Iraq to Libya and Syria. Much has changed over the past seven decades, but what has not changed is the central role played by the UN. This book’s claim is that the UN is a constant feature and site of struggle in the Arab world, and equally that the Arab world serves as a central location for the UN to define itself against the shifting politics of its age. Looking at the UN from the standpoint of the Arab world, this volume collects some of the finest scholars and practitioners on the promise and problems of a UN that is framed by the geo-political contradictions amongst its member states and the noble promises of its Charter. This is a landmark book and the first of its kind – a close and informed study of the United Nations in the region that taught the UN how to do its many jobs.
The book will be released by University of California Press in Summer 2016.
360 pp. 6 x 9
Illustrations: 5 maps
978-0-520-28693-1 $65.00/£44.95 Cloth
978-0-520-28694-8 $29.95/£19.95 Paper
July 2016
About the Authors
Karim Makdisi is Associate Professor of International Politics at the American University of Beirut, and Research Director of the UN in the Arab World Program at the Issam Fares Insitute of Public Policy and International Affairs (IFI).
Vijay Prashad is Professor of International Studies at Trinity College and Senior Non-Resident Fellow at the Issam Fares Institute for Public Policy and International Affairs at the American University of Beirut.
*******************************************************************
Special Offer
ORDER ONLINE AND SAVE 30%
ucpress.edu/9780520286931
Use source code 16M4197 at checkout

Online ordering is currently available in the U.S. and Canada only.
For customers in the UK and Europe:
call John Wiley & Sons +44 (0) 1243 843291.
For all other territories, visit: http://www.ucpress.edu/go/ordering