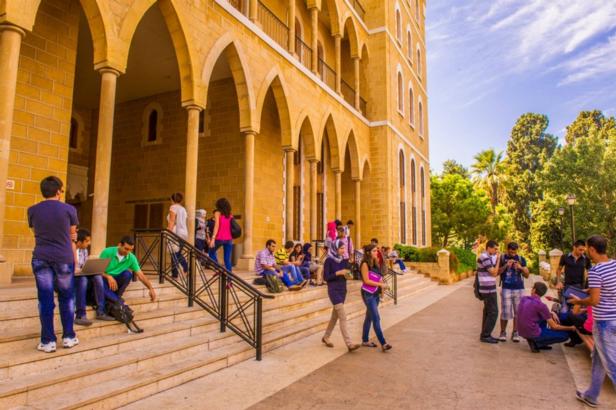 On November 20, 2015, the Board of Trustees of the American University of Beirut (AUB) voted to reinstate tenure after a 30-year hiatus. A task force composed of Board members, management and faculty will develop an implementation plan that will‎ be submitted to the Board of Trustees. Tenure was suspended at the University in 1985 at the height of the Lebanese Civil War, when the University’s mission and future were threatened following the assassination of 10th President, Dr. Malcolm Kerr. A series of task forces has carefully considered the policy for the past ten years, including one presided over by the late MIT President Dr. Charles M. Vest.
The decision to reinstate tenure was voted on by acclamation in the University Senate in 2014, and carried forward by the current administration under AUB President Dr. Fadlo R. Khuri and Interim Provost Dr. Mohamad Harajli. A series of studies and discussions have been undertaken by the current AUB administration under the auspices of the Board’s Academic Affairs Committee, led by its chair, Dr. Huda Zoghbi of the Baylor College of Medicine, in collaboration with the Board’s Finance Committee, chaired by the CEO of the Arab Bank, Mr. Nemeh Sabbagh. The studies determined that restoring tenure and the protection of academic freedom it provides was highly likely to enhance recruitment and retention of world-class scholars at AUB, and to enable transformative, paradigm-shifting research at the 150-year-old university.
Dr. Zoghbi, a pioneer in neurobiology and a member of the National Academy of Sciences and the National Academy of Medicine, echoed the timeliness of the decision. “The caliber of scholarship at AUB has been growing over the last 15 years, thus the time is right to reinstate tenure and propel AUB forward as a world-class research university,” she said. “The Board has carefully taken this step after considering all of our responsibilities towards the long-term health of the University, including our fiduciary oversight role. A task force of faculty, administration and Board members will undertake the design and implementation of tenure.”
President Khuri added, “We are grateful to the Board for this powerful message of trust in our mission and in the caliber of our scholarship. For 150 years, AUB has been the most influential proponent of liberal thought and high-quality research in the Arab World. In the final analysis, however, tenure and its privileges confer the ultimate academic protection and inspire high-risk, high-impact research and scholarship. While there is much work to be completed in the design and implementation stages of tenure, we as an administration, faculty, staff and students, are profoundly grateful for this vote of confidence from our Board in our vision, mission and future. We will bear this challenge with great pride, purpose and responsibility for this remarkable university. Our world-class faculty are up to the challenge.”
This step is seen as historic, not only for AUB and its faculty, but also for liberal thought, and for excellence across the Middle East. AUB has a long and storied history as a bastion of academic freedom and counts among its current and former faculty cadres of genuine thought leaders and scholars who have made indelible contributions to research, education and service.