The Arab Uprisings a Decade On: Egypt and Tunisia 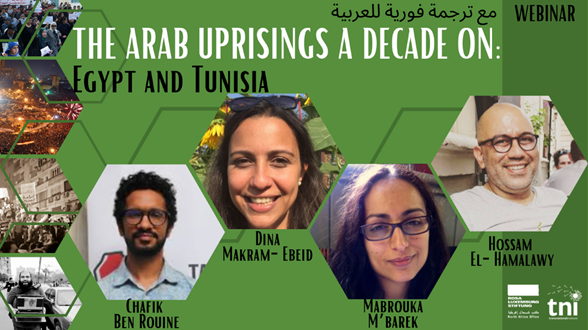 To attend the webinar, please register on zoom here:


Webinar will be in English with simultaneous interpretation into Arabic.

Organised by the Transnational Institute (TNI) with Rosa Luxemburg Stiftung – North Africa, this webinar is the first of a series and will focus on Tunisia and Egypt, the birthplace of what is called the ‘Arab Spring’. The webinar will include activists and scholars from the two countries to reflect back on the historic events of 2010-2011, in order to draw important lessons.

A decade ago on 14th January 2011, after weeks of historic protests, Tunisians deposed their decades-long dictator Ben Ali. Inspired by this revolutionary development, Egyptians embarked on an equally inspiring revolt which in barely 18 days culminated in the overthrow of Mubarak; another despot. These revolutionary uprisings shook the world in a few weeks and swept away western-backed tyrants - one after the other – in what is still undoubtedly among the most unforgettable historical events. The melodious chants “The people want the fall of the regime” echoed across the region and crossed several continents, expressing a deeply self-emancipatory transformative experience.

Like most revolutionary situations led by common peoples, the 2011 uprisings released enormous energy, a collective effervescence, an unparalleled sense of renewal and a major shift in consciousness. Despite an amazing show of resilience and people power, these revolts faced considerable challenges and setbacks.

The movements found themselves pitted against entrenched authoritarian and counter-revolutionary forces that were bent to crush them. But before we hurry to the aftermaths, and without declaring ‘revolutions’ the discursive property of a past tense, we intend to look back, to take stock precisely in order to look forward. This webinar is the first of a series - each with a different focus and angle -and will focus on Tunisia and Egypt, the birthplace of the magnificent revolts. The aim is to revisit these historical moments with some of the finest scholar-activists, participants and witnesses from those very contexts. Together we shall reflect on some of the key achievements and defeats and draw new lessons.

Mabrouka M’barek: is a doctoral student in sociology at University of Massachusetts Amherst. She was an elected member of the Tunisian National Constituent Assembly from 2011 to 2014. Twitter handle: @mabmbarek

Chafik Benrouine: a Tunisian activist and economic analyst. He is the co-founder and current president of the Tunisian Observatory of Economy.

Dina Makram-Ebeid: an Egyptian scholar-activist. She is an assistant professor at the American University in Cairo. Her interests are in the areas of gender, labour and economic & political sociology.